WNC Rail Corridor Committee Goes to Raleigh (not by train)

The delegation from WNC arrived in beautiful downtown Raleigh in time for our 11:30 a.m. lunch meeting with the NC DOT Rail Division. Our delegation was joined by several NCDOT Rail Division staff members. They included Patrick Simmons (Director), Allan Paul (Director-Operations and Facilities), Cheryl Hannah (Rail Planner), and Shirley Williams (Director-Environmental and Planning). I want to say a big thank you to the Rail Division for their help over the last couple weeks for their help in preparing our presentation for the committee. 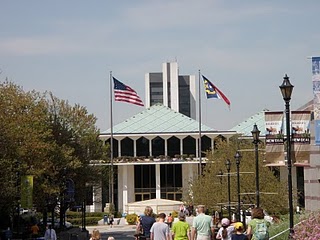 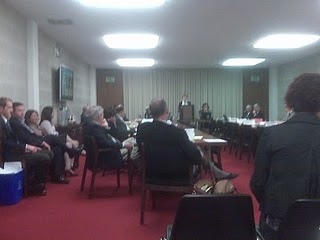 While waiting for our turn to present we heard presentations dealing with rail logistics, the state rail plan update, and North Carolina’s shortline railroads. Finally, it was the WNC Corridor Passenger Rail Committee’s turn to present. Judy Ray spoke about the conception of the group and the work the organization has done over the past decade. This included 140 resolutions of support for passenger rail by North Carolina towns, municipalities, and organizations. Judy’s presentation was followed by Lance Hight highlighting the redevelopment progress Conover has had in restoring their depot. Conover is a great success story as the town is converting an old factory into a community center and depot. Stephanie Monson and Brett McCall concluded the presentation by telling of Asheville’s renewed enthusiasm surrounding passenger rail. This included the Asheville City Council’s renewed resolution supporting passenger rail and Brett’s Facebook fan page (The People for Rail to Asheville), which now has over a 1,000 fans! Join now!

The presentation was well received and Rep. Deborah Ross of Wake County followed with a question regarding the cost of bringing passenger rail to WNC. This was answered by Patrick Simmons of the Rail Division. He explained the corridor was estimated to cost $134 million or roughly $1 million per mile of track (much cheaper than highway). 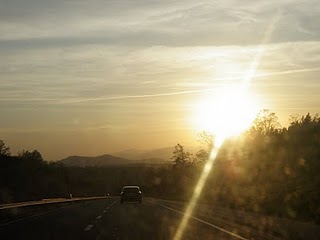 Coming home on I-40 to beautiful WNC

This trip to Raleigh marked 480 miles in the car on I-40 (see photo from road above). It was a great chance to show our state leadership the desire Western North Carolina has to bring back passenger rail. I look forward to one day traveling to Raleigh by train.