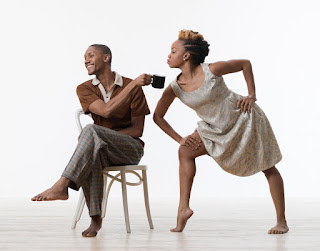 Winner of a 2016 Jacob’s Pillow Dance Award, one of dance’s highest honors, Camille A. Brown and Dancers perform at the Diana Wortham Theatre on Thursday and Friday, February 16 and 17, at 8:00 p.m. Ms. Brown is a versatile dancer and choreographer whose works range from light-hearted to spiritually based to politically charged to personal. In addition to its evening performances, the company leads several educational and community residency activities during its Asheville tour stop.

In Asheville the company performs from its repertory including selections from: “Mr. TOL E. RAncE”–the Bessie Award winning piece that launched Ms. Brown’s career and includes performance to live piano; “Black Girl: Linguistic Play”–a duet that uses the rhythmic play of African-American dance vernacular to evoke childhood memories of self discovery; “Ink”–using the rhythms and sounds of traditional African instruments as its center, travels through time with elements of Blues, Hip-Hop, Jazz, and Swing; and “New Second Line”–which is dedicated to the spirit and culture of New Orleans.

A prolific choreographer, Ms. Brown has achieved multiple accolades and awards for her daring works that connect history with contemporary culture. Informed by her music background, she utilizes musical composition as storytelling and makes a personal claim on history through the lens of a modern Black female perspective.

Community Workshop – February 16, 4:00 p.m. at the Arthur Edington Center (the Reid Center)
Free class for the community. All levels and all ages are welcome. Rooted in the African-American dance vernacular, this workshop celebrates the power of African-American social dance and its impact and influence on American dance forms throughout history. Participants will explore the ways communities used movement as a way of protest, liberation, and/or healing.

Pre-Performance Discussions – February 16 and 17, 7:00 p.m.
Pre-performance discussion with poet, artist and community activist DeWayne Barton: “Using Art to Engage Communities” from 7:00 p.m. to 7:40 p.m. at The Block on Biltmore, prior to the 8:00 p.m. Camille A. Brown performance each evening. A native of Asheville, Barton is the founder and CEO of Hood Huggers International, an organization that builds community pillars in ‘Affrilachia.’ The Block is located at 39 S. Market St., at the corner of Eagle and Market, just steps from the Rhino Courtyard entrance to the Diana Wortham Theatre. Pre-show discussions are free to ticket holders.

Matinee Series Performance – February 17, 10:00 a.m.
Camille A. Brown and Dancers performs as part of the Matinee Series for Students and Families, with a daytime performance on Thursday, February 17 at 10:00 a.m. These performances are designed for school groups, homeschoolers, community groups, and families. Tickers are available from the box office at 828-257-4530.

In addition to performing, Camille A. Brown and Dancers strive to instill cultural curiosity, introspection and reflection in its audiences by providing outreach activities to students, young adults and incarcerated women from local communities in NYC and across the country. In 2014, Ms. Brown also founded two initiatives: The Gathering, an annual open forum for intergenerational Black female artists to advocate for greater cultural equity and acknowledgement in the contemporary dance world; and BLACK GIRL SPECTRUM, a multi-faceted community engagement initiative that seeks to amplify the cultural and creative empowerment of Black girls and women through dance, dialogue, and popular education tools