$4 Million Poncho Contract for Industries for the Blind 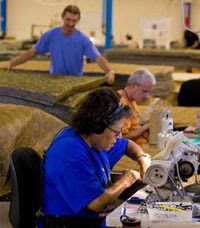 The Economic Development Coalition for Asheville-Buncombe County (EDC) and Industries for the Blind (IFB) announced today the awarding of an over $4 million federal contract that will bring 21 jobs to Buncombe County. IFB is a self-supporting not-for-profit organization that has won many prestigious awards over the years, most recently receiving national recognition for having the highest growth in jobs for the blind for an unprecedented five out of six years. This recent order for 145,000 poncho liners over a 6-month period will equal $4.7 million in new sales.

“Industries for the Blind is proud to be a strong contributor to the Asheville community and economy,” stated Randy Buckner, Director of Asheville Operations. IFB achieves its success by offering a number of programs and services to the visually impaired community through A Brighter Path Foundation (meeting the needs of school age children to seniors), and Upward Mobility (promoting people who are blind into roles of increasing responsibility). These programs provide training, adaptive technology and equipment engineering to enable IFB employees and others in the community to progress to more complex and technical jobs.

“IFB plays an extremely important role in our community by transforming people from tax consumers to tax payers, while enabling a sense of independence and self-worth,” expressed Chairman of the Buncombe County Commissioners, David Gantt. “We are so pleased that IFB has found this business climate conducive to meeting its strategic goals and thank the management team for choosing Asheville-Buncombe County in which to grow.”

IFB is the largest employer of people who are blind or visually impaired in North Carolina and second in the nation with over 380 workers and fills annual contracts for labor and services valued in excess of $90 million.

Chairman of the EDC, Bob Roberts, commented, “We are honored and gratified by IFB’s presence in our community. IFB has a strong record of providing excellent career opportunities for area citizens.”

The EDC for Asheville-Buncombe County is a public-private partnership dedicated to the continuous improvement of the local and regional economy and well-being of its citizens. During the past five years, the EDC has been actively involved with projects with a cumulative investment of over $351,350,000 and project employment of over 2,683 persons. The EDC is funded by Buncombe County, the City of Asheville, and the Asheville Area Chamber of Commerce through the Advantage Asheville campaign.