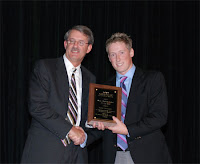 Robie Campbell was named the Small Business Leader of the Year for a company with 15 employees or less at last night’s Chamber Annual Meeting. He was also recently received national recognition from Go Mini’s. Here is the press release

“I’m extremely proud to be associated with a person of Robie Campbell’s caliber, and even more proud that he is part of the Go Mini’s dealer family. He is tireless in his efforts to provide his market with the best service available” said Bill Norris, CEO of Go Mini’s. “The award was presented to Robie in recognition of his outstanding achievement and selfless contributions to the growth of the Go Mini’s brand, as well as his personal contribution of extensive time, effort, and assistance to other dealers by sharing his knowledge and experience” said Norris.

Mr. Campbell is well known for his leadership ability and business savvy. He has been previously recognized as the Small Business of the Month, a Rising Star Award winner, and a two-time recipient of the Sky High Growth Award. In addition to being a principal in three different Go Mini’s Dealerships, Robie Campbell is also a partner in Union Transfer & Storage, an agent for United Van Lines, and RJT Relocation, an agent for Mayflower Transit. Because of his success as a Go Mini’s dealer, Mr. Campbell also oversees the Dealer Training Program for new Go Mini’s Dealers.