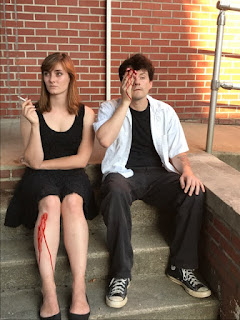 Attic Salt Theatre Company is proud to once again team up with 35below for Rajiv Joseph’s bittersweet comedy, Gruesome Playground Injuries. Attic Salt produced the acclaimed How I Learned to Drive at 35below in November 2016, opening the season there, and is now closing it with this offering. The company has a long relationship with the black-box theater, previously presenting the hits God of Carnage and Vanya and Sonia and Masha and Spike as well as the smash hit All in the Timing. 35below is located at 35 East Walnut Street in Downtown Asheville. The performances will be held Fridays and Saturdays at 7:30pm and at 2:30pm, from July 14th through the 30th. Tickets cost 20 dollars and can be purchased through the Asheville Community Theatre box office at ashevilletheatre.org or by calling 828-254-1320.

Widely known for the much-lauded Bengal Tiger in a Baghdad Zoo, Rajiv Joseph has been the recipient of many coveted theater awards for his startling works, as well as being a Pulitzer finalist. Although Joseph is a relative new voice in the theater, he has already established himself as one of the most imaginative and original.

Gruesome Playground Injuries was first produced in Houston in 2009 with film star Selma Blair, and went Off-Broadway in 2011 starring Pablo Schreiber and Jennifer Carpenter. Its uncommon presentation, innovative uses of time and the ability to capture the uniqueness of relationships has it being taught at colleges and in theater programs around the world.

The play follows Kayleen and Doug’s odd connection as they find a certain kinship in a series of life-altering calamities. Despite being an unrealized romance, the each find themselves constantly drawn to the other and shows how needing often supplants wanting, ultimately asking the question: Shouldn’t every great love story leave permanent scars?

Director Jeff Catanese said of the play, “The characters are literally broken when we first meet them. The exploration is in the wounds we don’t see and sometimes don’t even feel. No matter what your take on these characters, and their odd relationship, it’s hard to deny that this is a love story.”

Kayleen will be played by Asheville stage newcomer Nina Troy and Doug by her real-life partner Patrick Brandt, who was last featured in The Nerd, Attic Salt’s most recent production at NC Stage Company. Of this example of art imitating life, Catanese said, “We didn’t seek it specifically, but I was hoping to get one of our great, local acting couples to perform this show. There’s an intimacy, both in the text and in the presentation, that a couple already familiar with each other will be able to convey that would be much harder to exact from those who aren’t.”

Attic Salt’s Executive Director, Marci Bernstein, will serve as producer on this show, with costumes designed by local fashion designer McKinney Gough. The play will be directed by Jeff Catanese, Attic Salt’s Artistic Director, and stage managed by Lilly Mills.

Tickets for Gruesome Playground Injuries are available now through the Asheville Community Theatre box office at Ashevilletheatre.org or by calling 828-254-1320.