The Blue Ridge Parkway Destination Center has earned the gold LEED certification. The Destination Center on the parkway is a great interactive center located near the Parkway Headquarters in East Asheville. If you haven’t been it is well worth the visit.

Here is an excerpt from the article on GreenBuildings.com:
The Destination Center for the Blue Ridge Parkway has attained LEED Gold status in a rating that acknowledges the building’s design exceeds the standard for high energy efficiency.

The Blue Ridge Parkway, which celebrates its 75th anniversary in 2010, stretches for 469 miles between the Shenandoah National Park in Virginia and the Great Smoky Mountains National Park in North Carolina. The Parkway Destination Center is in Asheville, N.C.

In certifying the Destination Center’s compliance with Leadership in Energy and Environmental Design standards at Gold level, the U.S. Green Building Council awarded the maximum 10 points for energy efficiency.

The USGBC also awarded an additional point for besting the 60 percent standard for energy savings: The project tracked a 75 percent improvement when compared with performance for a comparable conventional building, according to Lord, Aeck & Sargent, the architecture firm that designed the center.

The center, completed in January 2008, includes a 10,000-square-foot green roof that was seeded with drought-tolerant native plants, hydronic radiant-heated flooring, a high-efficiency HVAC system with an energy recovery unit and daylight harvesting with a lighting system that is expected to reduce lighting loads by 78 percent.

Among the more visually striking features are the 13 passive solar Trombe walls that stand in a sawtooth formation on the south facade. 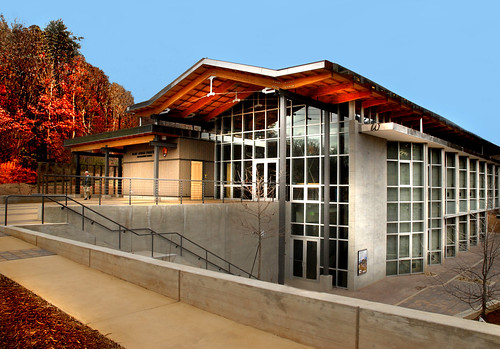 Read the full story at: http://greenerbuildings.com/news/2009/01/13/blue-ridge-parkway