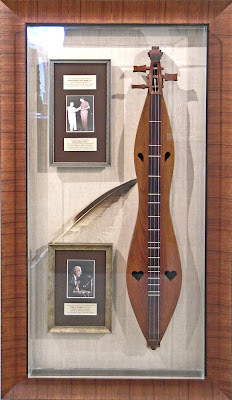 The Sams dulcimer is a one-of-a-kind instrument. It features wooden tuning pegs and hand-carved scroll. The craftsman’s name, “Sams,” is carved into the wood of the headstock. Both the Sams dulcimer and Virgil Sturgill’s turkey quill are housed in an attractive display created by BlackBird Frame & Art. The cover of the display opens so that the dulcimer and quill can be removed for playing. The dulcimer will not be on display at Shindig on the Green, but it will be showcased in the gallery at BlackBird Frame & Art at 365 Merrimon Ave. in Asheville.
Dulcimer maker James (Jim) Sams, Jr. was a woodworker from Enka, North Carolina, a small community just west of Asheville. In 1965, his focus turned to the dulcimer craft. It is unknown how many dulcimers Jim Sams created before his death but many were originally sold at Heathside Crafts, a co-op located between Boone and Blowing Rock, NC where Appalachian artisans could market their wares.
Celebrated Appalachian balladeer and dulcimer player, Virgil Sturgill brought his acclaimed style of folk singing and lore to the mountains of Western North Carolina in 1946 when he relocated from Carter County, Kentucky. Sturgill performed at the Folk Heritage Committee’s own Mountain Dance and Folk Festival, the Asheville Freedom Festival, the Swannanoa Valley Folk Festival, the Virginia Music Festival, and the Asheville Folk Festival. Sturgill performed on radio and television programs in the 1950’s, including national broadcasts on ABC and CBS networks. His musical folklore was often accompanied by dulcimer, which he played with a Turkey feather.
The non-profit Folk Heritage Committee’s mission is to produce Shindig on the Green and the Mountain Dance and Folk Festival events each year in order to support the preservation and continuation of the traditional music, dance and storytelling heritage of the Southern Appalachian Mountains.
For more info about the Folk Heritage Committee, the Sams dulcimer, Shindig on the Green, or the Mountain Dance and Folk Festival, visit www.folkheritage.org or call the Folk Heritage Info Line: 828-258-6101 x 345.