King Mackerel and the Blues are running: “Songs and Stories from the Carolina Coast” 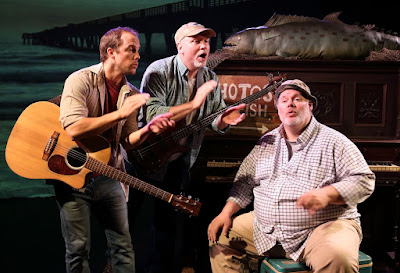 North Carolina Stage Company (NC Stage) is pleased to present King Mackerel and the Blues are Running: Songs and Stories from the Carolina Coast by Bland Simpson and Jim Wann with Don Dixon and J.L. Mills. King Mackerel is a theatrical performance of music and stories about fishing and life along the Carolina coastline. A pure salt watered delight of tall tales and rollicking songs that include a three men acoustic folk/soul/rock revue, with an environmental edge, of Southern coastal life. The Coastal Cohorts is a trio of good-ole boys who happen to be staging a benefit concert to save the Corncake Inlet Inn. The lively cast of fishermen musicians sing up a storm, tell fish stories, ghost stories and relate accounts of first loves and ones that got away.

The origin of the play is an interesting story in itself since it happened by accident. The Embers, a very popular beach music band, originally contracted Bland Simpson, Jim Wann and Don Dixon in 1984 to write some songs and material for them. When the Embers realized the amount of staging and lighting involved, they did not want to continue the project, so Bland Simpson, Jim Wann and Don Dixon decided to perform the production themselves. They wrote the songs and a script, named themselves The Coastal Cohorts, and “King Mackerel” was born. The show has been going strong since.

The North Carolina Stage Company is located at 15 Stage Lane in downtown Asheville and has been producing professional theatre in its 125-seat playhouse since 2001. It continues its commitment to artistic excellence, intellectual exploration and education during the 2017/2018 Season. For information on season passes, upcoming productions, educational opportunities and much more, call the theatre’s box office at (828)239-0263 or visit www.ncstage.org.