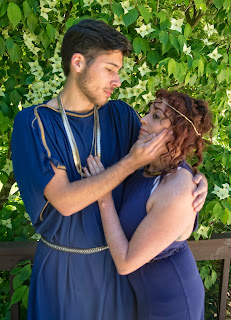 “Troilus and Cressida “
by William Shakespeare

Produced by Montford Park Players at the Hazel Robinson Amphitheatre

Theatrical Performance Montford Park Players, an Asheville theatrical tradition, is proud announce their upcoming production of William Shakespeare’s Troilus and Cressida. All performances will be held at the Hazel Robinson Amphitheatre at 92 Gay Street in the heart of Asheville’s historic Montford District, from July 7th through the 29th on Friday, Saturday and Sunday evenings at 7:30pm.

This performance like ALL of Montford Park Players’ shows will be absolutely FREE to attend. This historical tragedy hinges on the romance between Prince Troilus and Cressida, the daughter of a traitorous priest, against the backdrop of the Trojan War.

Based on several difference medieval and renaissance sources, the play includes such legendary figures as Achilles, Hector, Ajax and Helen of Troy herself. As the war ramps up, Shakespeare takes a cynical look at war and sexual politics. The play remains one of Shakespeare’s most enigmatic treasures.

Says director Andrew Gall, “The opportunity to work on a something so rare and strangely unique is terribly exciting. Troilus and Cressida is a rarely performed work which means that there is little of the baggage and expectations that surround many of Shakespeare’s more famous works. So in many ways, it is like working on a new play. Indeed, Montford Park Players hasn’t mounted a production of Troilus and Cressida in seven years. “I am really interested in evoking the ruggedness of the Trojan siege from a visual standpoint,” says Gall. “I hope our audience gets a chance to see a work that is rarely performed and that whatever expectations they have about the play are exceeded and defied. I hope they find something surprising in it.”

Troilus and Cressida stars some of Montford Park Players most popular actors and actresses, including Gary Freedman as Troilus, Devyn Ray as Cressida, John Stockdale as Hector, David Mycoff as Priam, Stuart Moore as Achilles and Sophie Yates as Cassandra. A large ensemble provides some gritty and exciting takes on the battles themselves.

Additionally, on the afternoon of Saturday, July 15th (from 12-5pm), Montford Park Players will also return with their 3rd Annual Midsummer Faire, to get young and old in the spirit of the show to follow.

Montford Park Players, has been presenting Shakespeare and other classical works to the Asheville community since 1973, and has since grown to be one of Western North Carolina’s most beloved and well-known cultural attractions.