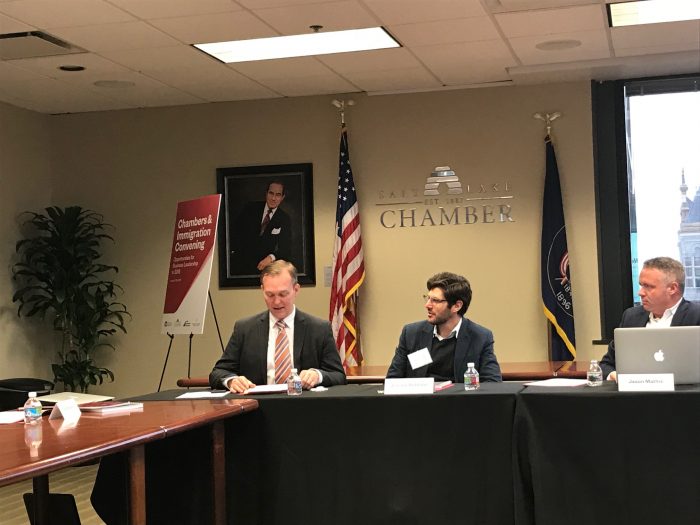 This Thursday, the Asheville Chamber united with 50 chambers from 23 states and signed an open letter that advocates bipartisan support for Deferred Action for Childhood Arrivals (DACA) and permanent protection for Dreamers. These protections are intended to allow young immigrants in our communities and across the country to continue to pursue their education, contribute to our labor force and tax base, and start new businesses.

“The thousands of Dreamers here in North Carolina have grown up in this country and are major contributors to our economic success,” said Corey Atkins, the Asheville Chamber’s Vice President of Public Policy. “Congress must act to allow these hard-working young people to remain in our communities.”

Atkins was one of 15 Chamber executives from across the country who convened at the Global Talent Network (GTN) conference in Salt Lake City, Utah last month hosted by New American Economy, a public policy organization that focuses on bipartisan immigration reform. The Asheville Chamber is one of the founding members of the GTN, which is a Chamber-specific division of New American Economy.

“With the goal of leveraging immigration as an economic growth strategy, we compared notes and examined programs that would most benefit our business community,” said Atkins. “It became clear that training and reinforcing labor needs would prove critical to our local and national economy. Supporting our immigrant population is an important piece of that effort.”

This is true especially in Asheville, Atkins notes. According to the 2018 Business Walk survey, 26% of local businesses stated need for a higher availability of qualified personnel. Workforce availability was reported as an issue particularly for companies of ten or more employees, with training being the largest obstacle for manufacturing, construction, and accomodations. The loss of immigrants would deal a significant blow to the local workforce and economy.

Moreover, a 2014 study by New American Economy reported that North Carolina has the seventh-highest population of young, undocumented immigrants in the nation and is one of the top 10 states in the nation where undocumented immigrants contribute the most in state and local taxes. Our state has 47,956 immigrant entrepreneurs and immigrant spending power equates to $17.1 billion. Without the contributions of those protected under DACA, North Carolina would lose $1.9 billion annually and in the next 10 years, our country’s GDP would decrease by $433 billion.

“We want to do the right thing for young people and the economy,” Atkins said. “Our hope is that a bipartisan solution will come out of Congress that allows Dreamers to stay, reforms our broken immigration system, and makes Asheville a more inviting and open community.”