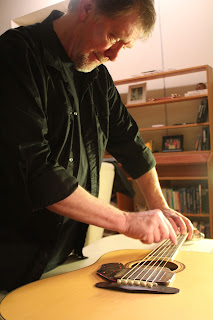 Vo Inventions enthusiastically announces the Vo-96 Kickstarter campaign has surged well past its initial $50,000 funding goal!  With individual pledges ranging from $5 to almost $5,000, backers have pulled together to make the Vo-96 and Acoustic Synthesis a viable new facet of the music industry. Pledges are currently totaling over $70,000. With less than one week to go, Vo Inventions is in the final drive to put their acoustic synthesizer in the hands of as many guitarists as possible.

For the growing community of Vo-96 backers, greater campaign success means having Vo-96 Acoustic Synthesizers produced more efficiently and delivered more quickly.  The greater the reach of this campaign, the faster we will see Acoustic Synthesis(tm) widely recognized as the most significant and fundamental new development in musical instrument technology to appear in decades.

The Vo-96 has a variety of flexible options; it is available on Kickstarter at several inventor-to-customer price points, ranging from $1050 for a luthier kit to $4800 for a Vo-96 with custom handmade guitar. Since the Vo-96 works on practically any steel-string acoustic guitar, expect a wide variety of tones, timbres and playing styles to emerge from intrepid musicians exploring this new, fertile ground.

The technology is so advanced that the results produced seem perfectly natural, organic and acoustic. And in fact they are: All of these new sounds are shaped by what a physical guitar string can produce – because it’s the actual vibration of the string being changed by the Vo-96 that makes the different sounds.  For this reason, all the sounds inherit the character of the guitar to which the Vo-96 is attached. The Vo-96 greatly augments the sonic palette of an acoustic guitar, yet the instrument remains an acoustic guitar.

The sounds are only one aspect of it, and are not meant to compete with keyboard synthesizers. The real reason for owning and playing a Vo-96 equipped guitar is in the realism of the experience. There is no loss of neurological correspondence between what you feel under your fingers and from the guitar pressed against your body and what you hear in your ears. Its synthesized sounds are real – they are just as “acoustic” as any sounds the strings of a guitar have ever produced and are heard directly from the instrument without the need for amplification or speakers.

That’s the key to it, the thing that makes it a completely unique experience compared to anything else: The Vo-96 creates an acoustic instrument having definable and modulate-able timbres. You play it for the same reason you play an acoustic guitar instead of an acoustic guitar patch on a keyboard synth: It’s real. 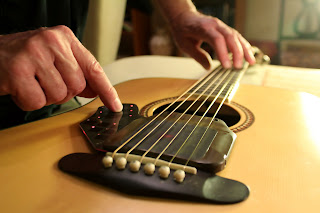